Those who know Yurbban will already know Yoshi Sislay, current resident artist in the house. The Japanese illustrator has collaborated with us on several occasions and at different times until, at the beginning of this year 2020, he made an intervention on the Rooftop of the Yurbban Trafalgar hotel. A work that embraces the views of the city that we now miss so much.

During these days Yoshi is at home with his children and there he continues to give free rein to his creativity. So much so that he proposes a game to play with the family: the Goose game, a classic from our childhood. Whether you have children or not, we expect you to have great funny moments with this magnificent board. Click HERE to download it. 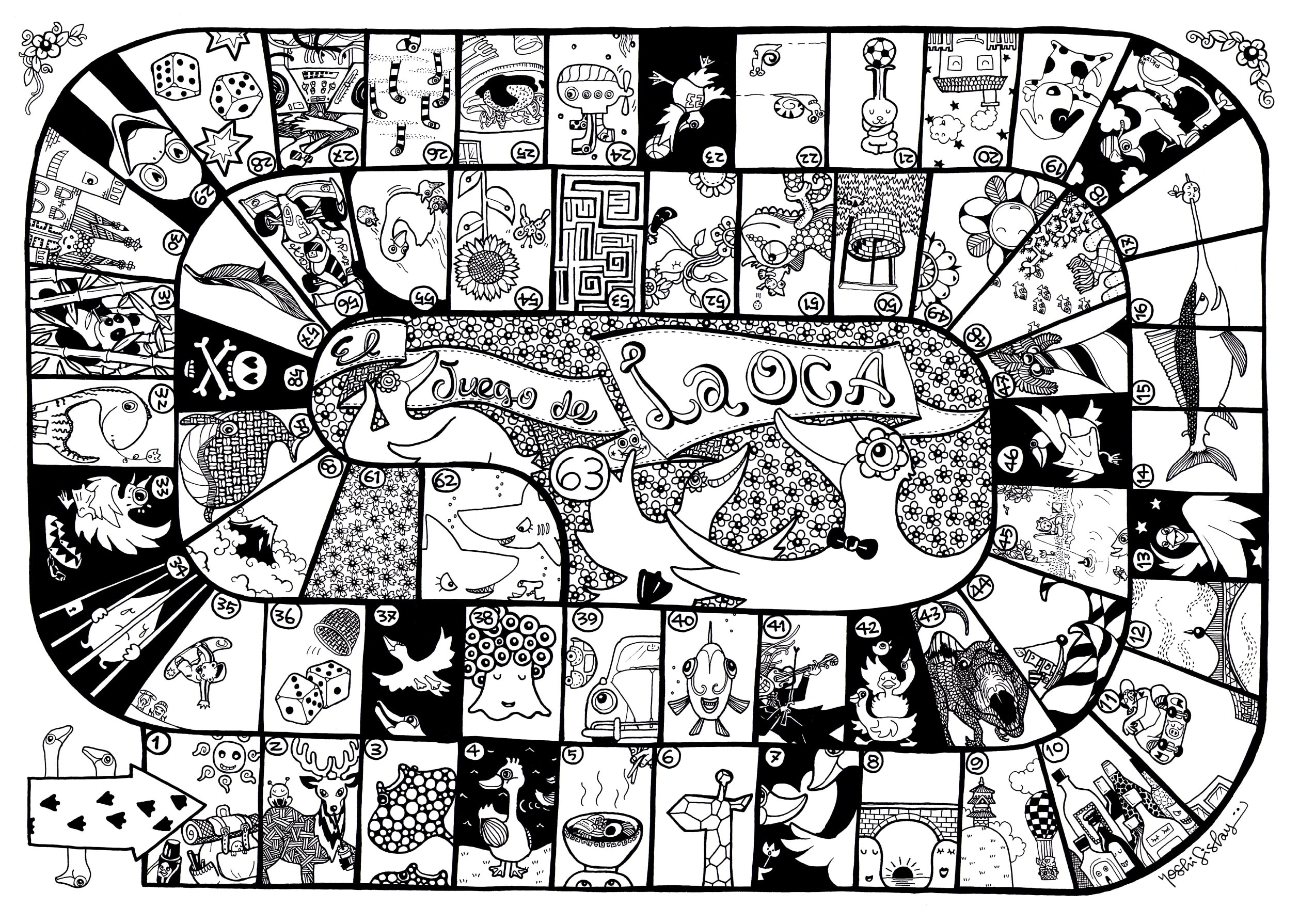 It is played with one or two dice, two or more players play with one chip each. The player with the highest score on the dice begins. The chips advance according to the score of the roll. Depending on the square in which you fall you can go forward or on the contrary, go back and in some of them, a punishment is indicated. The game is won by the first player to reach box 63, “the Garden of the Goose.”

In certain boxes, not only is it limited to falling into them and complying with their rule, but at the same time, we are also chanting their well-known and catchy phrase, thus adding a little extra fun. Then I leave you details of the special boxes and those with those famous phrases.

The goose: They are distributed all over the board and when we fall on it we advance to the next goose with the phrase: ¡De oca a oca y tiro porque me toca! (from goose to goose and I shoot because it’s my turn!) and we throw again.

The bridge: There are two squares that when falling on one of them leads us to the other, with which we can move forward or backward, this is also accompanied by its phrase: ¡De puente a puente y tiro porque me lleva la corriente!(from the bridge to bridge and shooting because it carries the current!)

The dice: Same rule as with the bridge, we have two squares as well but with the difference that in these it goes much further. His phrase: ¡De dado a dado y tiro porque me ha tocado! (from dice to dice and throw because he touched me!)

The Inn: A turn is lost.

The Well: Two turns are lost.

The Maze: You get trapped in the maze until you get the number you choose.

The Skull: This is the worst for my taste since it is almost at the end of the board and when we fall on it we have to start again. Not only can you fall into it without further ado, since if we go overboard and go backward we can fall into it too.

Thanks Yoshi for keeping our spirit up!